Cuttack,11/10/2021 ( Odisha Samachar )-In another Vigilance Operation today, Sri Srikanta Hota, Junior Clerk (Offence Section), office of DFO, Sundargarh, Dist-Sundargarh has been apprehended by Odisha Vigilance for demanding and accepting undue advantage (bribe) of Rs.10,000/- (Rupees Ten Thousand) from a complainant in order to process the file for release of compensation amount to the complt. on account of the death of his father by a wild elephant in the year, 2019.

Based on the above complaint, a trap was laid on 11.10.2021 wherein the accused Sri Srikanta Hota, Junior Clerk was caught by the team of Odisha Vigilance while demanding and accepting undue advantage (bribe) of Rs.10,000/- (Rupees Ten Thousand) from complainant. The bribe money was recovered from the possession of Sri Hota and seized in presence of witnesses. Both hands wash as well as pant pocket wash of Sri Hota gave positive chemical reaction, confirming acceptance and handling of bribe money by him. Following the trap, simultaneous searches have been launched on the residential house and office room of Sri Hota at Sundargarh. He has been arrested and is being forwarded to the Court.

In this connection, Rourkela Vigilance P.S. Case No.10 dated 10.10.2021 U/s 7 Prevention of Corruption (Amendment) Act, 2018 has been registered and is under investigation. 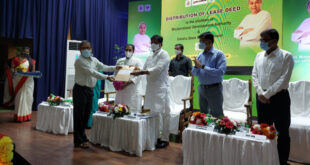