Based on the above complaint, a trap was laid on 16.02.2022  wherein the accused Dr. Sukant Kumar Jena was caught by the team of Odisha Vigilance in his rest room at CHC, Charichhaka campus while demanding and accepting undue advantage (bribe) of Rs.8,000/- (Rupees Eight Thousand) from complainant. The entire bribe money was recovered from the possession of Dr. Jena and seized in presence of witnesses. Both hands wash of Dr. Jena gave positive chemical reaction, confirming acceptance and handling of bribe money by him. He has been arrested and is being forwarded to the Court today. In this connection Bhubaneswar Vigilance P.S. Case No.4 dated 16.02.2022 U/s 7 Prevention of Corruption (Amendment) Act, 2018 has been registered and is under investigation. 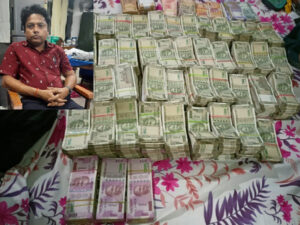 Following the trap, search was launched on the residential building of Dr. Jena at Nandan Vihar, Nageswar Residency, Patia, Bhubaneswar. During searches, apart from other recoveries, the following assets including hard cash have been recovered in the name of Dr. Jena and his family members so far;