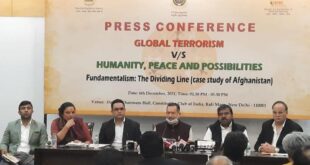 Bhubaneswar 11/09/2021 ( Odisha Samachar )- The Odisha government on Friday ruled out any relaxation in the guidelines issued for the conduct of Puja in mandaps/ pandals during the festive season. In a video address to the people of the State, Special Relief Commissioner (SRC) Pradeep Kumar Jena said that the height of the Durga idol should remain less than 4 feet as per the August 9guidelines issued by the State government.Jena said the festival season has begun with the Ganesh Chaturthi and, in view of the same, the State government had earlier released an advisory on the conduct of Pujas and other festivals (on August 9). “The guidelines are in the interest of people and we all need to sacrifice,” he said.Jena’s address came in the backdrop of demands made by the Opposition parties in Odisha, BJP in particular, togive relaxations in the pandemic restrictions during the Durga Puja festivities, including waver of cap on the height of idols. The BJP has called for a bandh in Cuttack on September 13 over the demands while similar chorus have grown for a bandh in Bhubaneswar, where Durga Puja is widely celebrated in public, on that day.It is pertinenet to mention here that as per the August 9 guidelines, Pujas shall be conducted in indoorlike conditions only for observance of rituals without public participation, pomp and grandeur. Besides, Puja pandals/mandaps shall be covered on three sides and the 4th side shall also be covered in a way not to allow any public view of the idols. There shall be no darshan by public/ devotee and the size of the idol should be less than 4 feet.”We have been fighting the COVID-19 pandmeic for the last 18 months and the goverment is taking all measures to save lives. We have been successful largely due to the government’s active measures and people’s support,” said Jena.So far, two waves of Covid-19 have been witnessed since March 2020. During the 2nd wave, the State had to strike a balance between life and livelihood while announcing lockdown and partial unlock, he said. “Several sectors are yet to be opened due to which some are still getting affected, but the decisions are

being taken in the largest interest of people,” he said.The second wave of Covid-19, however, doesn’t seem to have been over yet as the cases continue to remain between 30,000-40,000 in India. “In Odisha, the cases are mostly between 650 and 1200 in the last 10-15 days. A new variant of Covid has once again raised fear among countries,” said Jena.Jena said that Odisha needs to learn from what happened in Kerala where festival Onam led to spread of COVID-19

and the same had happened after Kumbh Mela. However, Rath Yatra was celebrated without devotees, setting an example.On the eve of Nuakhai, Jena also greeted people of the State, especially Western Odisha, and said that people should celebrate the festival while strictly adhering to the COVID-19 norms and must avoid gatherings.

Previous Golden Boy Pramod Bhagat Felicitated By Odisha CM On Homecoming
Next Is Kubbra Sait shooting for her next project with Shahid Kapoor and ave directors Raj and DK, this social media banter surely hints at that !

Justice to the Public shall  be in the language of public (“Janata  ko nyay, janta ki bhasa main”) : Bhartiya Bhasa Andolan.