Why is it necessary to have a correct name? – J.P. Tolani Jee 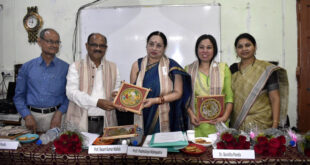 Bhubaneswar, 8/1/2021 ( Odisha Samachar )- Four students of Gram Vikas School, Odisha, have bagged the prestigious Inspire Awards given to innovator students by National Innovation Foundation an autonomous body under Department of Science and Technology, Government of India.

Three students from Gram Vikas High School, Kankia, under Ganjam district, and one student from Gram Vikas Shiksha Niketan School, Thuamul Rampur, under Kalahandi district, have been selected for the award. Each one of them will receive an appreciation amount of Rs.10,000/- from National Innovation Foundation.

All the four students have won the &#39;Inspire Award ; for their innovative ideas and developing prototypes such as for road safety, plucking coconuts easily and wood vehicle for carrying patients in remote areas. Mr. Debendra Dash, the Principals of GVHS, Kankia, and Mr. Arbind Swain, the Principal of GVSN, Thuamul Rampur, have congratulated the students on their achievements. Gram Vikas Schools, run by Gram Vikas; a well-known grassroot organization primarily based in Odisha founded by Joe Madiath, are a group of four Schools operating in three different districts of Odisha i.e Ganjam, Gajpati and Kalahandi. These Schools primarily host tribal students.

These Schools are situated in extremely remote areas having very limited access to transport, communication and other essential services. In one of the Schools that situate in Kalahandi district, there is absolutely no access to modern communication facilities such as telephone and internet at all. Despite facing all these adversities, these Schools have played a pivotal role in bringing the most marginalized sections of the society a step closer to literacy and education. In 2017, Gram Vikas High School, Kankia, was also selected for the establishment of  Atal Tinkering Lab by Atal Innovation Mission;, a flagship program of the Niti Aayog, Government of India.

WE HAVE TO LEARN FROM RUSSIA TO SAVE OURSELVES DIVIDED ON OUR LANGUAGES OF THE NATION : PROF DEVINDER SINGH, PUNJAB UNIVERSITY